Artist and local resident Chelsea Davine was cycling around the Sant Gervasi neighbourhood when she spotted the recently inaugurated Kaoni Gallery.  Originally from London, she studied at Chelsea Art College and has been living in 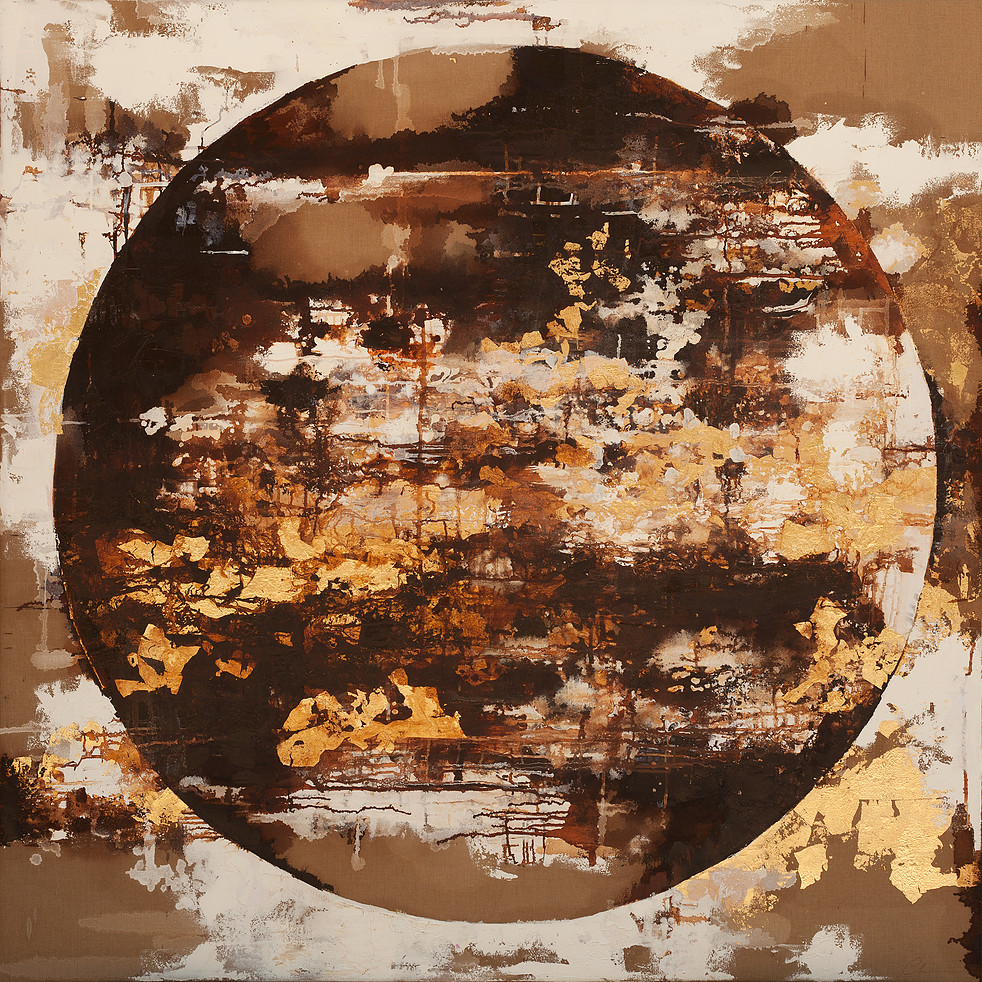 Artist and local resident Chelsea Davine was cycling around the Sant Gervasi neighbourhood when she spotted the recently inaugurated Kaoni Gallery.  Originally from London, she studied at Chelsea Art College and has been living in Barcelona since 1998. Her inquisitive streak led her inside, where she met Paksha Evangelista, gallery director.

Davine’s work is deeply inspired by nature. She is fascinated by the shoreline, the change of the light, the weight of the moon, or how a field has been ploughed. “I often think I see things that other people don’t really look at,” she shares. “People tend to say that the autumn leaves are so beautiful, but so are the spring leaves when they come out.”  It’s through transitions that we become aware of the passing of time. 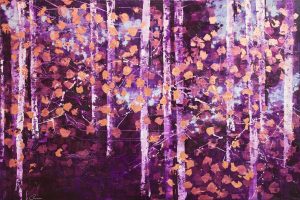 In the Beech Canopy 195cm x 130cm copper leaf, oil on canvas. This piece is based on time spent in the Empordá area of Catalunya, Spain. AVAILABLE through the Russell Gallery

Davine was working on the theme of the elements: earth, fire, air and water, and when Evangelista mentioned her ayurvedic practice and the fifth element, ether, Davine sensed this as the connection between the elements which binds them together. It almost answered her question which had been brewing in the background; perhaps it’s the unknown quality, the feeling before a storm when the air becomes heavy, or just before dawn when the air has that ethereal quality. Maybe that’s ether? It’s intangible, but it feels as if something is there and you can feel how it creates a connection between the sky and the ground. Ether is sometimes likened to consciousness itself…

“Exactly. Sometimes when I’m in the studio my process becomes very internalised, and I think it could be the space where creativity, the subconscious and ideas come from. Are they all stored in you head? It was a click moment for me.”  In this solo exhibition entitled “Elements” (Nov 16 – Jan 17) ether is represented by the connection between the paintings. The exhibition feels like it comes together into something greater than the individual paintings, as a body of work that has a flow of ideas.

Davine’s tendency to work on two or three paintings at the same time gives some a diptych or triptych feel. Their colours give this effect as well. The five elements in Chinese medicine are defined by their relationship to each other; yin and yang are complementary polarities. The gold colours of autumn in her paintings are echoed by touches of gold in spring.

“It’s also the principle of chiaroscuro, without the pitch black there isn’t the brilliant light,” she adds.
Davine laughs lightly, confessing that it feels a bit hippy to talk this way, and she’s not really like that. The contrast that creates this depth, however, cannot be denied. Maybe it’s from this ether and subconscious that the ideas which are running around her head are coming from.
“I try to manifest them onto a canvas, and sometimes it’s more successful than other times.”

The elements are both subject and process. “Sea water was used on the steel paintings, and I really like the fact that although water seems so gentle it’s more powerful than the steel as it corrodes and metamorphoses it,” reflects Davine. “Think of how the sea constantly erodes. A powerful storm can be very destructive , and something simple can become very powerful. Earth, which is dormant, can become a landslide. Water can be in the form of a puddle, or the ocean waves with a completely different energy force and power behind it. I try to have a harmony in my work, but also energy. Even though something can be inert it can also have a lot of power, like the moon.” 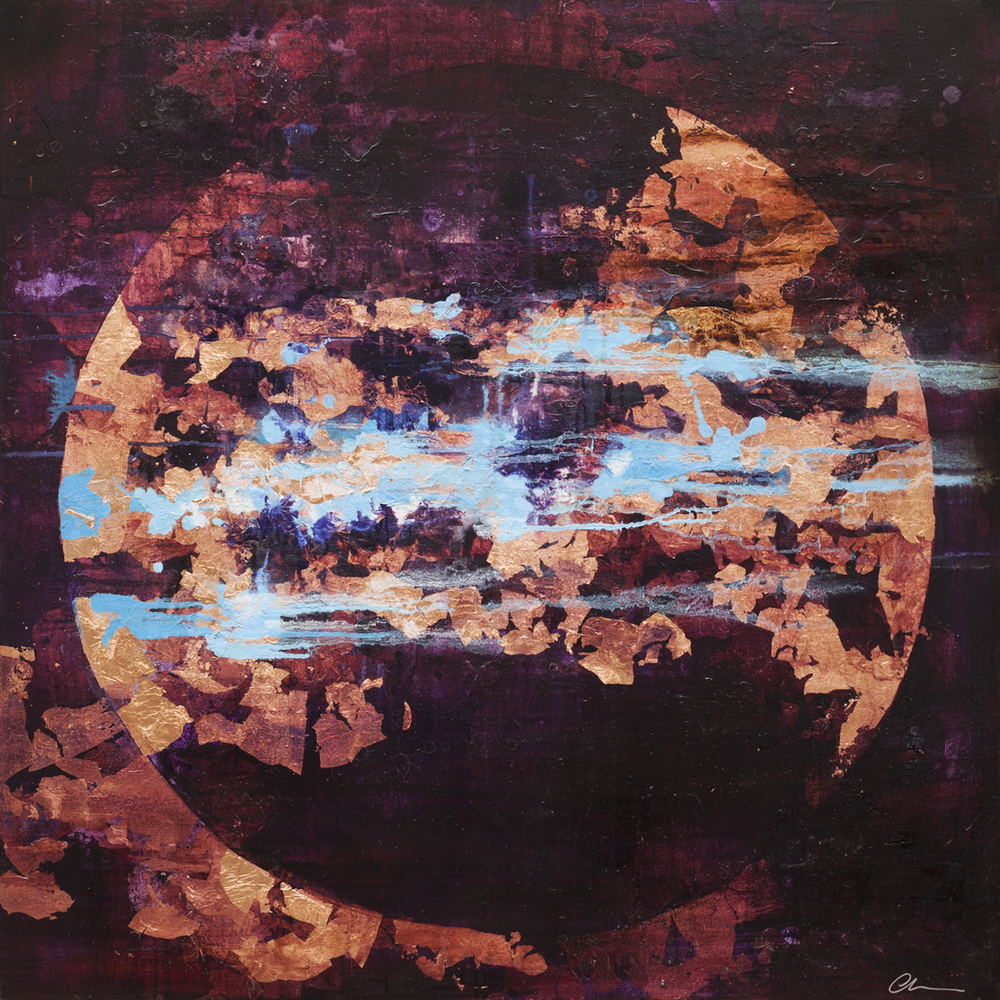 Meridian with Blue. 80cmx80cm. Available through the Russell Gallery

Metallic paints also add to the powerful effect, in a medley of gold, silver and copper leaf, and oils. “I rarely use acrylic. I find oil has a plasticity that allows me to paint over layers with it.”

When she approached the elements, was there anything she learned about them, any qualities she hadn’t realised that occurred to her?

“I think air is the hardest one to capture, as immediately you think of the wind and storms. It’s actually the air around the moon that gives it weight. With the circular paintings it’s difficult to make them feel grounded in the canvas, connecting the circle within the square. Otherwise they become too graphic.”

It’s about creating depth as well…

“Yes, making it feel like it fits on that canvas. I asked myself whether they would work better if they were just circular, and realised they were completely different pieces. The circular paintings are more sculptural pieces somehow, even though they are painted.” 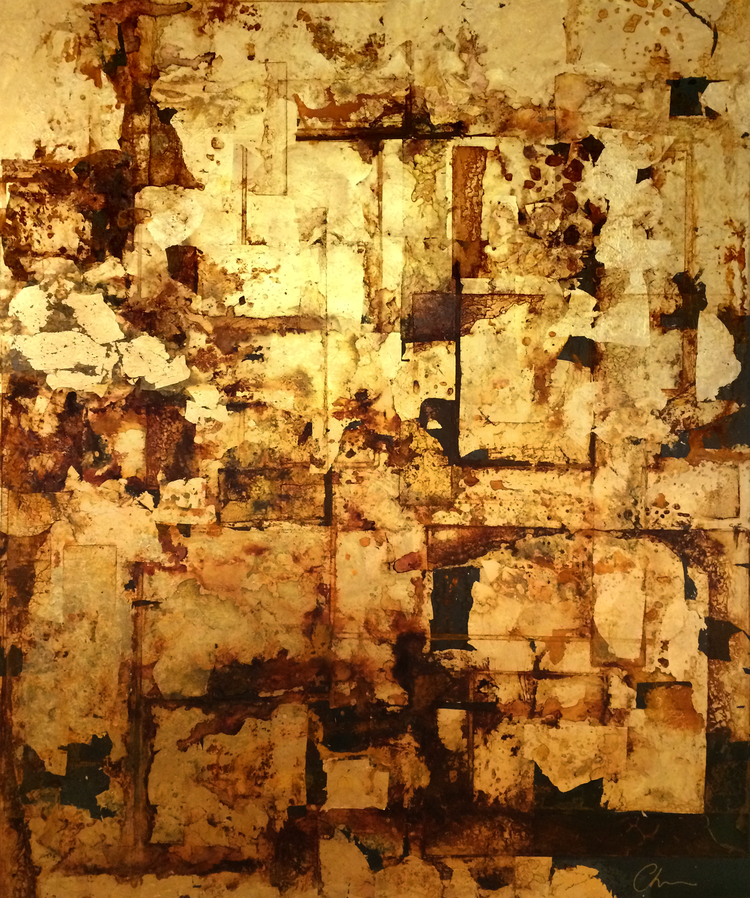 Davine clearly remembers that even at art college she was always more interested in the negative space around what she was drawing than the thing itself. “If I concentrated, say on that vase and bowl, it’s the skirting board and floor around it that give it life. All those other angles place it.” Before her work became completely abstract, she always felt it was most important to ground whatever she was drawing or painting and make it feel like it wasn’t floating or on top of something, but part of it. There are no lines around anything in life, she observes.

A recent visit to Madrid and its big art institutions like the Prado, Reina Sofia and Thyssen museums inspired her hugely, but what about the contemporary scene in Barcelona?

“There are lots of people who are busy doing things, but I don’t think there’s much support for them here. I don’t feel there are any big galleries which draw the international exhibitions – I’ve never queued for an exhibition in Barcelona, yet I’m quite happy to wait for 3 hours to get into the RA in London. If you come into the city from outside it has such positivity and energy, but when you’ve been here for a while you realise that the city’s cultural scene really isn’t living up to its potential.” We discuss this at length, concluding that that it’s not the innovation that’s lacking.  There are plenty of interesting collectives and projects constantly popping up. However, most of them fizzle out because of administrative requirements, their own dispersion and the lack of a market to sustain their activity. 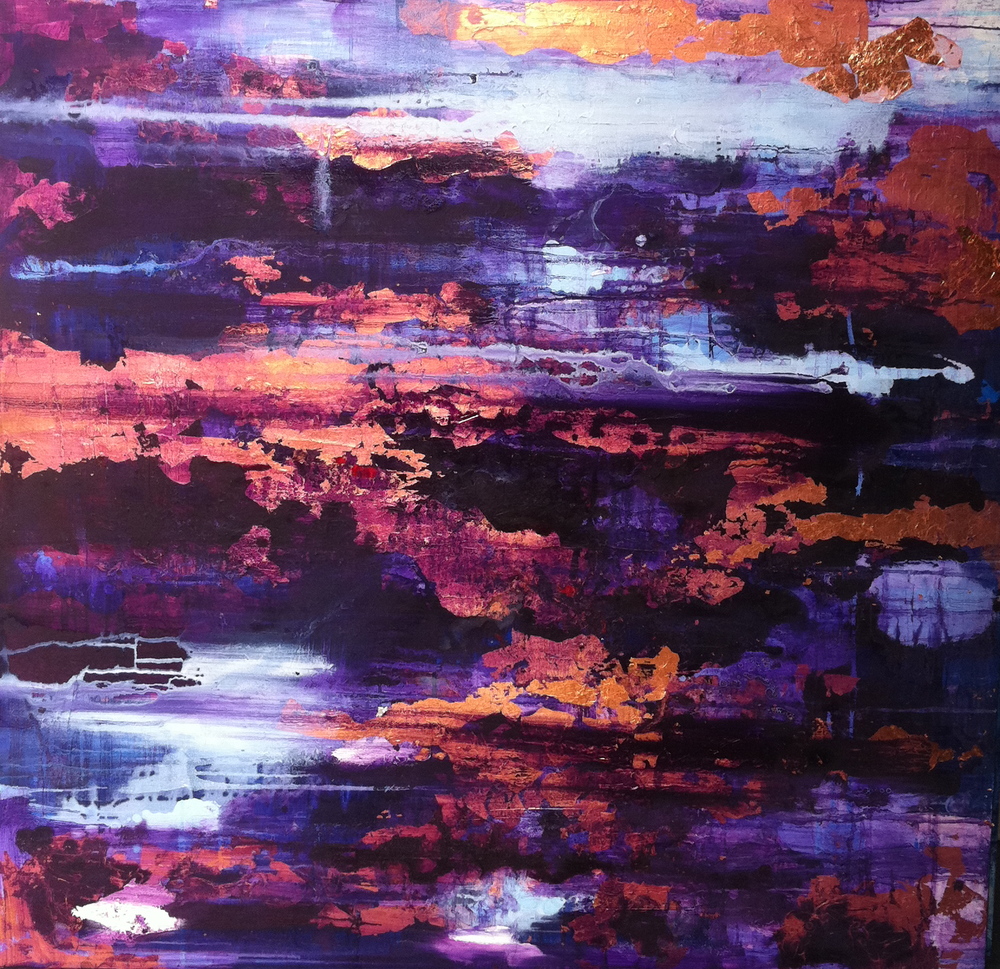 Davine comments that she sees so many empty spaces and thinks they should open them up and let people run pop-up stores. “It’s criminal that these spaces are empty and that you need to put down such a large deposit down to get a venue. There’s no fluidity to it; there’s more versatility in Madrid. I feel I’m always swimming against the tide here, and I don’t feel like that in London or Madrid.  I think the city has masses of potential, but it’s not living up to it. Barcelona could be huge. People find it so stimulating – they come here and they want to see architecture and art, yet everything’s becoming rather twee and commercialised. There should be more spaces that are showing local people’s work and selling it! MACBA should open its doors and do a massive exhibition of all the art in the city! When was the last time you saw an amazing exhibition of a local artist in there? When I’ve had a few drinks and getting lippy I say “Right, I’m walking in there with one of my paintings and hanging it on the bloody wall… I’m doing it!”  And everyone says “Yeahh!”  But then next day I’m hung over and I don’t.  Seriously though, I’d like to get a whole group of artists and go in there with our work. I’m fed up with that huge white space in the entrance – last time I went in there were kids making collages as an activity for the Punk exhibition – what was that about? We just want to show our art work in the institute that’s supposed to be representing our city. They’ll probably freak out and not let us in… so we’ll sit outside with our art instead.”

She goes on add that the city has become a Disneyland for tourists and young people are getting pushed further out. Maybe she’s not connected enough here, but she doesn’t see enough open spaces.  What responses would she like to see from the local authorities? “They could take on several spaces and rent them out to multidisciplinary artists for a minimal amount and say ‘Come on, do what you can.’ Maybe it would work.”

We return to her own projects. From this exhibition’s theme of the elements she is moving onto flow, breathing, and how one thing flows into another. The idea came from a big diptic which she loved, called ‘Exhale Inhale’ which made her realise there’s a lot more she’d like to explore here. “Maybe it’s because I started pilates….” 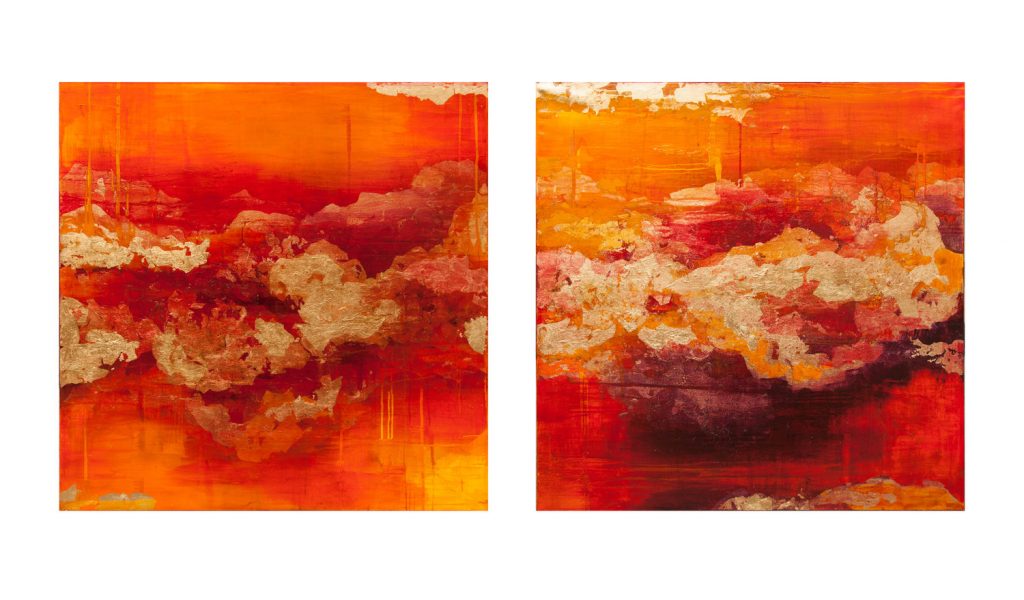 INHALE /EXHALE is a diptych based upon a desire to be balanced and present in the moment and find calm.

“Also, I want to work on some more diptics and triptics and take the idea of continuity between the canvases further.” Textures and colours of the Mediterranean light and lifestyle continue to inspire Davine, as she draws on the ether to extend the continuity of the natural world onto her canvases.

Join Chelsea Davine on Facebook, and explore her online portfolio.

“The painter has the Universe in his mind and hands.” Leonardo da Vinci